IFFA is an acronym from Internationale Frankfurter Fleisch Austellung, or the International Meat Fair in Frankfurt. It is the largest market event in the world dedicated to the topic of meat. The market is not as big as the car market, because IFFA takes place once every 3 years, while the car show every year. For regular visitors, it becomes clear that globalization as well as information transfer technologies are causing shrinkage in many business areas, e.g. CEBIT Hanover - until recently the largest computer fair in the world - were closed in 2018 due to a decrease in exhibitors and a decrease in the number of visitors. Nevertheless, IFFA does not appear to be reporting this trend. In 2016, the fair was visited by 63,000 customers from 143 countries; as many as 66% were foreign customers (in 2013 60 509 from 144 countries). Such results make this fair the most international in the meat industry. Similarly, exhibitors broke a quantitative record in 2016 (1027 and in 2013 966). As in 2013, the market area amounted to 110,000 m2.

Coming to the IFFA, you can expect to meet customers from all over the world, because industry representatives come from Japan, through all European countries to Australia and Argentina. Because of its location, Germany dominates both as exhibitors and visitors, however the nature of the fair is absolutely international.

BlueVent air systems primarily has a meeting plan with SULMAQ http://www.sulmaq.com.br, with which it exchanges correspondence and phone calls since the IFFA 2016, where the first meeting took place. SULMAQ is the largest slaughterhouse machinery manufacturer in South America, and the Brazilian market is the largest in the world in terms of beef exports. Establishing cooperation with SULMAQ may be the largest market opportunity that is within the company's reach. In the pre-trade term, it was agreed that the highest-ranking director responsible for new products for beef slaughterhouses would be present at the IFFA.

In addition, before the IFFA, BlueVent sent email invitations to all previously encountered companies and to those with whom it had contact, but there was no visit. They were people from companies from Russia, Kazakhstan, Australia, Argentina and many others. Due to the most international nature of the fair, compared to other trade fair events, Bluevent air systems was not preparing to acquire customers from Germany alone, because the approach of German customers is highly hermetic.

Summary after the fair

Exhibitors 1016, of which 635 from outside Germany, including 36 from Poland (8th place after e.g. Italy, Spain, the Netherlands, but via the USA, UK).

66,340 visitors, of which 46,627 from outside Germany (70%), most of which are from Russia, the Netherlands, Spain, Italy, Poland, China, Ukraine, the USA, Austria, Australia, Switzerland, the Czech Republic, Brazil, UK, Korea South, Canada, Columbia, Belgium and Japan.

EU: The European Commission's short-term forecast projects a reduction in beef production in 2019 and 2020 in EU countries. In the first quarter there was a downward trend in the number of cows among the main cattle producers (Germany, France, the Netherlands).

In Germany, fewer pigs and cattle were delivered to slaughterhouses in the first quarter of 2019. According to preliminary data of the statistical office (Destatis) in the period from January to March this year. 13.95 million pigs were killed along with slaughter. It was by 617 950 units, i.e. by 4.4 percent. less than in the first quarter of 2018.

From Poland in January-November 2018, 439 thousand tons of livestock were exported, meat and beef and veal preparations (in carcass equivalent), 3% less than a year ago. In turn, revenues from export were 6% higher and amounted to EUR 1.5 billion. The object of export was mainly meat, which was exported 363 thousand tons, mainly to EU countries (84% share). 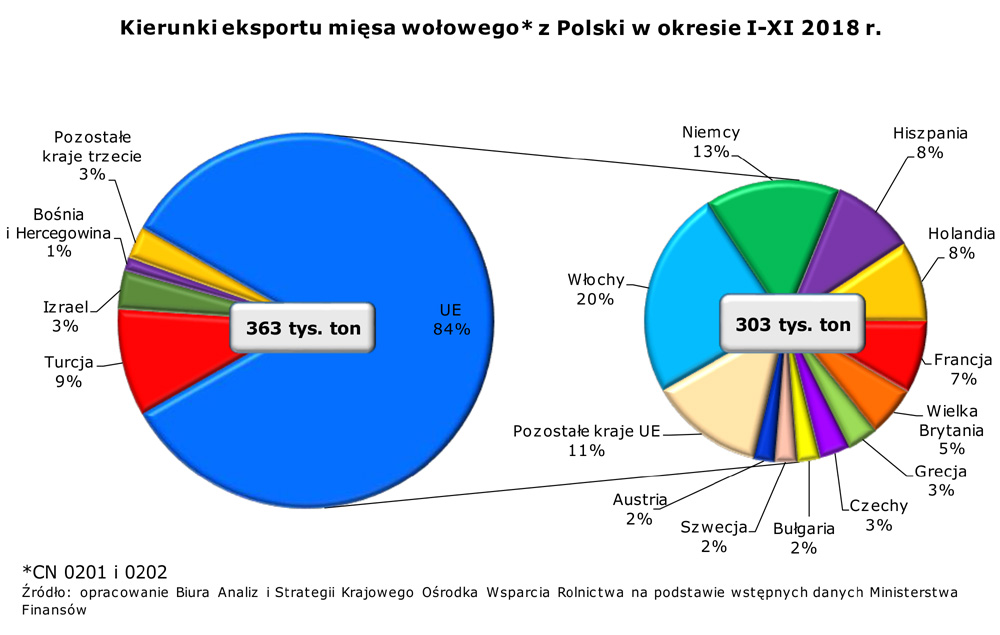 Data from the Ministry of Finance from 2018

According to data from the Ministry of Finance, beef exports in 2018 amounted to 391 thousand tons, i.e. 4% less than in 2017, of which 16% of meat went to countries outside the European Union. The value of exported beef was EUR 1.46 billion. The number of live cattle sold abroad decreased by 22.6%, while the import of live animals increased by 11.5%, which is due, inter alia, to the increased demand for calves for further fattening. The main recipients of beef from Poland were Germany (90 thousand t), Italy (80 thousand t) and Turkey (34 thousand t). Fresh or chilled beef accounted for 77% of beef exports.

Labskaus evokes extreme emotions. Some consider it a dish made of leftovers, others consider it a special treat. Regardless of the optics adopted, this is one of the most characteristic dishes of northern Germany, which is prepared from cured beef, marinated beets, onions, potatoes, sometimes also herring.

Labskaus looks a bit like Polish tartare, others call him a rolmops. This dish appeared for the first time in the culinary habits of German sailors, who, traveling the seas for many weeks and months, had difficult access to fresh food. So they were looking for an idea for such dishes that would be able to stay fresh for a long time. This is how a meat delicacy, or actually a slurry of cured beef, marinated beets, onions and potatoes was created. This is undoubtedly the most famous Hamburg dish and the specialty of northern Germany cuisine, about which there are true legends. Labskaus is also eaten in Denmark, Norway and Sweden. 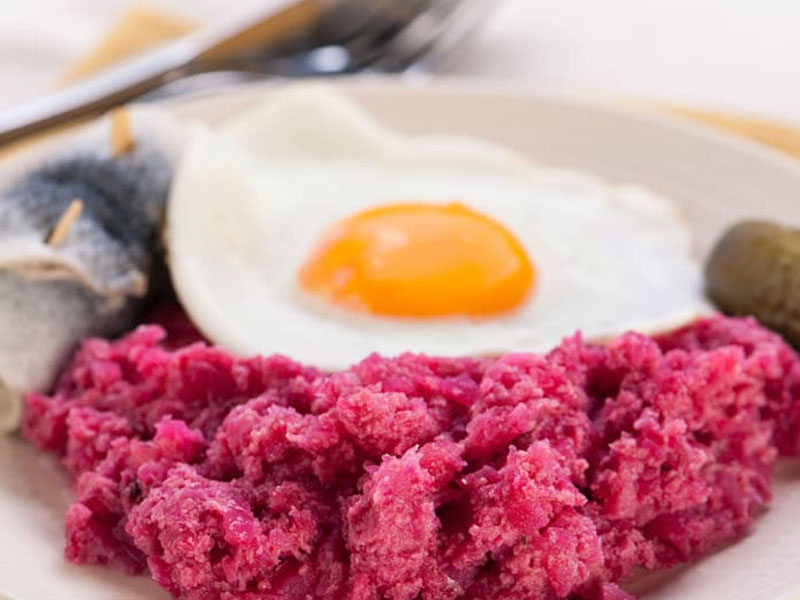 Rolmops, because this is what some people label Labskaus, were created for sailors. The purpose of the dish had an impact not only on the way of production and the use of cured meat for longer keeping freshness, but also on the form of the dish, which resembles a bit crumbly pulp. It must be remembered that the teeth of the sailors were destroyed by scurvy and other diseases associated with many months of staying at sea.

There are at least several variants of this dish, no one knows the original recipe. There is also no unambiguous answer to the question whether the meat intended for Labskaus can be cured wet or dry.

In addition, malicious say that this dish is simply leftovers of food that is in the kitchen. Most often, however, Labskaus is a combination of ground cured beef, mashed potatoes, pickled or boiled red beets, glazed onion and rolmops (herring). All of these ingredients were ground and combined with each other until a not very thick mass was obtained.

Method of administration – what to look for and combine with Labskaus?

Meat dishes in Germany are served mainly with boiled or baked potatoes, potato salad or fried cabbage. In the case of Labskaus it is completely different. This dish is usually put in a fried egg, and next to a pickled cucumber. Nothing more, no other extras. The dish should be simple and filling. Some, however, change its form a bit and serve rolmops next to ground meat and beetroot.

Labskaus is somewhat reminiscent of Polish tartare, although serving it with a fried egg somewhat destroys the culinary habits of Poles. These original rolmops with cured beef are also similar to Swedish polsa, i.e. dishes of ground liver, heart, onion and barley, which are served with fried egg and marinated beetroot.

The goal of the fair was to find potential customers who could purchase electrostimulation machines and distributors. BlueVent air systems Sp. z o.o. employees: Bazyli Gielniak and Igor Gielniak participated in the fair.

During the fair, 27 potential customers and partly exhibitors and guests from Poland visited the stand (8). Customers were actually interested in the product, because after the fair, they managed to keep in touch and initially establish trips to Turkey, India and Brazil. The company is also negotiating a trip to South Africa, Botswana and Zimbabwe. The fair seems to be fairly promising. 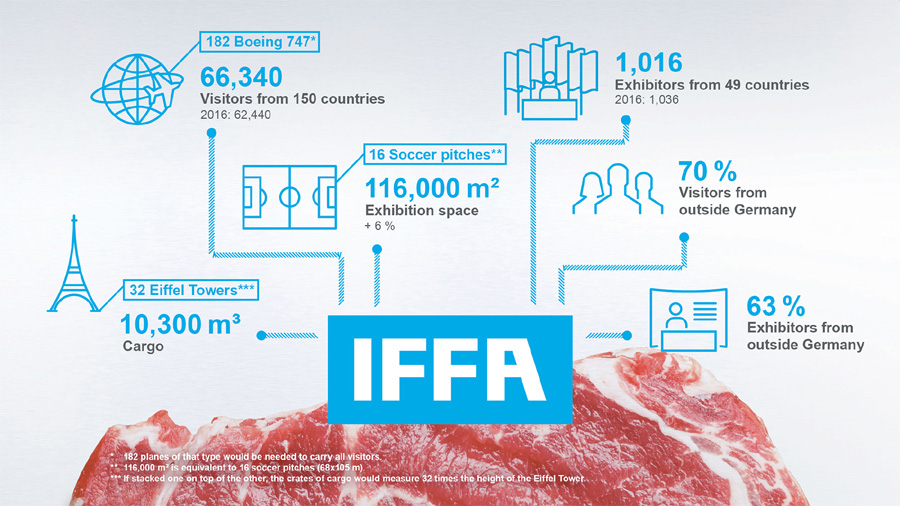 The IFFA Fair in Frankfurt am Main is the largest and most popular trade fair in the meat industry in the world. The contacts made during the fair, as well as information that was obtained about the level of development of individual markets, and in particular the strategic markets listed in the Go To Brand program for the machinery and equipment industry, allowed us to better assess which markets are the most promising. 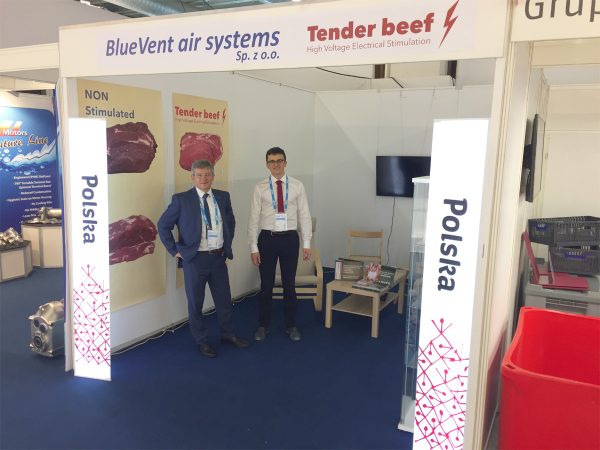 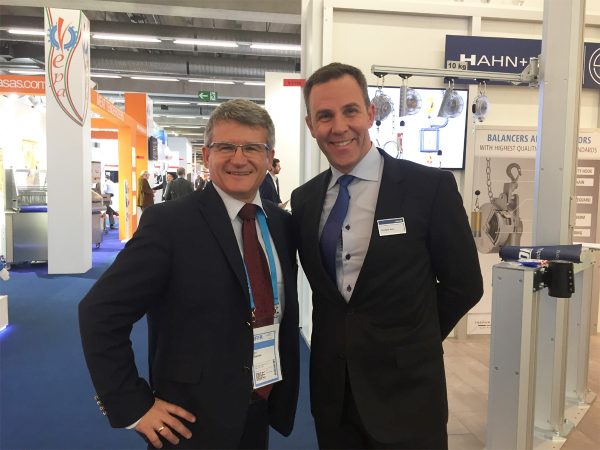 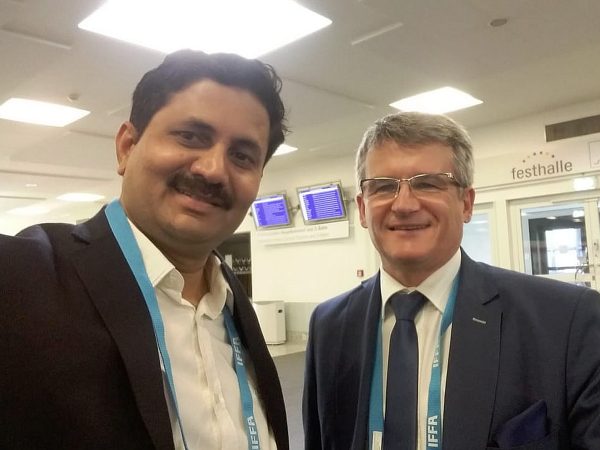 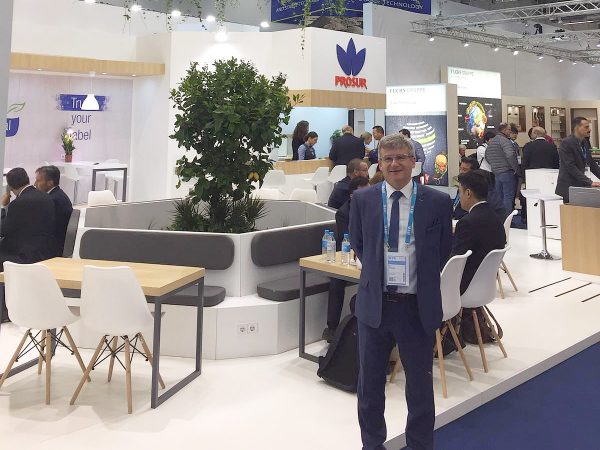 We use cookies (and equivalent technologies) to collect and analyse information on our site's performance and to enable the site to function. Cookies also allow us and third parties to tailor the ads you see when you visit our site and other third party websites in the same online network, including social networks. By clicking „Agree”, you agree to these uses of cookies. If you do not agree or if you would like more information, you can manage your cookie preferences by clicking the link provided.
I understand   Get to know more
Privacy policy
Necessary Always Enabled

The project is co-financed by the European Regional Development Fund under the Smart Growth Operational Programme for 2014 – 2020.